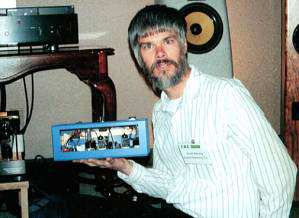 What exactly is a personal amplifier, you ask? Well, think compact and low power. The name says it all. The microZOTL generates a "microscopic" amount of power: about 1 watt per channel into a 4-ohm load, and even less power into higher-impedance loads. According to designer David Berning, the amp was originally developed as a high-quality amplifier for bedroom or office use where modest listening levels are appropriate, though additional uses such as headphone driver, tweeter amp, computer multimedia speaker, and high-efficiency horns are also possible. 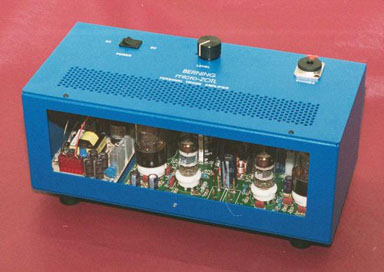 The amp drove my new BassZilla loudspeaker kit (98 dB sensitivity) to satisfying volume levels  even in a moderately large room. And its bass response was quite astounding, especially considering that it weighs in as a featherweight at only four pounds. Yet, it lacked dynamic headroom into a nominal 8-ohm load. Thus the single application that most convincingly jumps out of the pack is headphone amplifier. Of course, a headphone jack is provided on top of the chassis. I spent most of my time with this unit auditioning several headphones and rediscovering the joys of speakerless listening. Unencumbered by the colorations of the listening room, even an inexpensive headphone offers a greater level of tonal accuracy and smoothness of response relative to even the most expensive speaker money can buy.

The microZOTL completes the triangle of Berning ZH OTL (output transformerless) tube amplifiers, the others being the ZH270 and the Sigfried.  Most tube amplifiers use a conventional audio output transformer to convert the high impedance/high-voltage plate circuit of the output stage to the low-impedance, high-current drive demands of a loudspeaker.  Such transformers tend to be not only heavy and expensive to manufacture but also limit performance at the frequency extremes due to parasitic losses. The turns ratio between the primary and secondary sides determines the impedance matching of the transformer. Unfortunately, very high turns ratios are impossible to achieve in the real world. This means that some very linear triodes with correspondingly high plate resistances cannot be properly used in audio output stages because a suitable transformer cannot be constructed.

The OTL dream of eliminating the most problematic and expensive part in the circuit was pursued in the early 50s, and is usually associated with the legacy of Julius Futterman. Introduced in 1996, the ZH technology goes off in an entirely new direction. The ZH OTL amplifiers use high-frequency power conversion techniques to change the voltage-current transfer characteristics of the output stage. First, the audio signal is superimposed over a 250 kHz RF carrier. The advantage gained is that RF converter transformers with very high turns ratio can now be used without adversely impacting the power bandwidth.  Some audio purists have taken issue with Berning over the use of the OTL moniker, as the circuit does in fact incorporate transformers. These are not your typical audio transformers, to be sure, but clearly the circuit is not truly transformer free. As Berning explains, the effective turns ratio in the MicroZOTL is a whopping 168 to 1, making it possible to use a tube type in the output stage that is normally only seen in input or intermediate driver stages. It's a shame that the 6SN7 dual triode is so under utilized in modern audio circuits. Wake up world and smell the 6SN7! There are other triodes out there besides the ubiquitous triumvirate of small signal tubes, the 12AT7, 12AU7, and the high-gain 12AX7. In contrast, the 6SN7 is more robust and features a vivid harmonic spectrum that tube addicts like me drool over. Here a 12AT7 is used as an input stage/phase splitter, followed by a 6SN7 connected as a class A push-pull power output stage. The output impedance is only 2 ohms without negative feedback! It's a rare treat to be able to commune this closely with the heart and soul of a 6SN7, unobstructed by less capable tubes in the signal path.

This mini Berning may be powered from either a universal 100 to 240 VAC mains line or from a 12-volt DC source such as a rechargeable battery. This means that no rewiring is necessary for operation over the range form 100 to 240 VAC, or from 50 to 60 Hz. Any legitimate AC source should work just fine. However, if you are thinking of using a battery supply, be sure to read the various caveats and safety precautions outline in the Owner's Manual very carefully. The current draw from a 12-volt DC source is 2.1 amps and requires very large amp-hour rated batteries to obtain reasonable power reserves. I wasn't about to drag any lead-acid batteries into my listening room; hence all of the following listening impressions are based on strictly AC operation of the unit.

There's undeniably a lot of magic in that little box. My old pro sound Beyerdynamic DT 100 ($219) headphones had taken many field trips and spent their previous life span plugged into a variety of mixing consoles, tape decks and the like during various recording sessions. Over the years I've appreciated their superior isolation due the circumaural design, with the pads resting against the side of the head. And they've certainly proven to be extremely dependable and reliable. But they have consistently sounded fuzzy and lacking in resolution, as if they were muffled by an invisible pillow. Crude but sturdy is how I had them pegged that is, up until now. Just as a lark I plugged them into the Berning, and I almost fell out of my chair! All of a sudden, resolution and clarity galore! The ugly duckling was instantly transformed into a beautiful swan. Bass lines gained tremendous impact and precision. The midrange snapped into focus as though a thick veil had been lifted from the soundstage. Treble transients still sounded a bit coarse, but the degree of improvement was again dramatic. It became clear that cheap op amps, the sort of devices that headphone drivers in mixing consoles are made of, are uninspired performers. But that's not the end of the story. The Beyerdynamic in the past also failed to impress relative to other headphones - even when driven by the headphone circuit of several high-end integrated tube amps. Only the microZOTL succeeded where others had failed. It infused life and energy into an old and failing warhorse.

What I enjoy the most now about the DT 100 is its full-bodied lower midrange. The harmonic bloom of a well-recorded cello sounds absolutely spectacular with warmth and integrity only tubes can provide. Headphone designs that are supraural, meaning that they rest directly against your ears, typically manage to sound far less accurate in the bass range. One notable exception is the affordable Grado SR80 ($95). In addition, the SR80 sounds very open and spacious with excellent midrange clarity. It makes for a great first impression, especially with mellow sounding SE triode amps. The Berning, however, revealed the Grado's shortcomings very clearly. The Berning says: these are bright sounding headphones. The upper mids and presence range are significantly emphasized, as can be seen from a frequency response plot. They make for a genuine "wow" after a short listen, but through the microZOTL they started to gnaw at my nerves after just a couple of minutes. Just as significant was their lack of microdynamic conviction. They had a hard time switching from first to second gear. Vocal inflections and subtle volume modulations were largely lost through the SR80.

The ultimate test came via my reference phones: the STAX SR-X with the SRD-7 Pro interface. The interface module was connected directly to the amp's speaker binding posts. The SR-X (a supraural design) is weakest in the bass range, and the Berning while resolving what there was, did not add any gratuitous bass kick.  Electrostatic headphones are well known for their speed, control, and felicity of expression, and the SR-X is no exception. Imagine a Formula 1 racing car speeding along a tight course, firmly hugging the track through each hairpin turn. The SR-X is just like that with musical transients. Its clarity and control were allowed full freedom of expression. Inner detail was allowed to float to the surface of audibility effortlessly and without any artificial harmonic etching or ringing. Together, these components forged a natural and synergetic partnership. The treble range was reproduced with exceptional extension and air, and without any electronic artifacts. At no time did I feel that the Berning was impeding the performance of the STAX: high praise indeed for a $680 amplifier.

The microZOTL's greatest potential, in my opinion, is as a headphone driver for both low and high impedance designs, but it is versatile enough to find a niche in more exotic applications such as a tweeter amp.

Since the microZOTL is sold direct to the public, it represents an uncommonly good deal. No dealer markups for this puppy. At its asking price of $680, it runs circles around headphone amps costing thousands of dollars. But it's more than simply a question of money. Here, for the first time, through the magic of ZH technology it is possible to glimpse directly into the passionate soul of a 6SN7 dual triode, unobstructed by intervening layers of conventional transformers and power tubes.  It's a wonderful experience, and if you're a headphone aficionado, you owe it to yourself to reach out and feel the magic.